myclimate published its annual report 2021 today. The total revenue of the myclimate climate protection foundation increased significantly in the 2021 financial year. The Annual Report shows total revenue of around 45 million Swiss francs. In particular, the business area of offsetting for voluntary and mandatory markets made a significant contribution to our record performance, with more than 3.7 million tonnes of CO2 offset. In addition to the financial statements, the annual report also contains stories worth knowing, an SDG report, details on the CO2 offsets, selected partnerships and an outline of the now twenty-year history of myclimate. 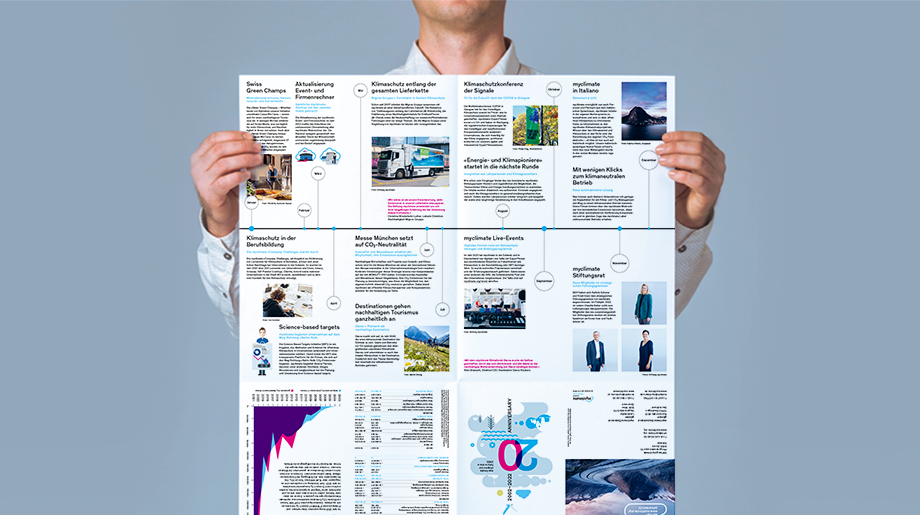 myclimate's annual report for 2021, including detailed consolidated accounts and several best cases and success stories can be accessed at the following link: myclimate.org/annualreport

In 2021, companies continued to work with myclimate for concrete solutions and measures in climate protection and for the development of comprehensive climate strategies. As a result, the services in the “Consulting and Solutions” business area as well as the number of voluntarily offset tonnes of CO2 – this time more than 3.7 million – reached new highs. Stephen Neff, myclimate CEO, commented: “It took ten years for myclimate as an organisation to offset a total of one million tonnes. The development over the last few years and especially in 2021 shows that climate protection services and the instrument of offsetting have arrived in the economy across the board. While previously it was mainly flights that were calculated and offset, our partners are now looking at climate protection as a holistic undertaking.”

The most important figures

myclimate was founded in 2002 as a spin-off of ETH Zurich, and has operated as a foundation since 2006. Since its establishment in 2002, myclimate has developed and supported 174 carbon offset projects in 45 countries of the world. Through these projects, around 13.5 million tonnes of CO2 emissions have been avoided since the organisation was founded. Altogether, 9.1 million people worldwide have benefited from myclimate’s activities, with around 65,000 schoolchildren, 11,000 apprentices and 1,400 students in Switzerland, Germany and Liechtenstein empowered to take effective action themselves. Meanwhile, myclimate’s projects have helped to create 20,000 jobs, plant 18 million trees worldwide, and set up 150,000 solar plants, 220,000 biogas plants and more than 770,000 efficient cookers. The climate protection and education projects have been shown to help achieve all 17 UN Sustainable Development Goals (SDGs).

20 years ago, myclimate's journey began with the "climate tickets", the predecessor of today's flight offsets. The offsetting of flights, which was the most important business field at that time, has not been the growth driver at myclimate for some time now. Since its establishment in the past few years, the foundation has evolved from a supplier of carbon offsetting to a provider of comprehensive climate protection solutions. Calculating emissions and strategically managing CO2 have become integral activities at many companies.

The myclimate annual report shows the long path that the foundation has taken since its establishment in 2002. In addition to the operating result for 2021, the report contains exciting highlights and events that shaped the Foundation in the successful past year.  On the reverse side of the report, the journey back in time goes even further: the myclimate timeline shows how the organisation has developed since its foundation almost 20 years ago and which stages of development and events have shaped the organisation over the years.