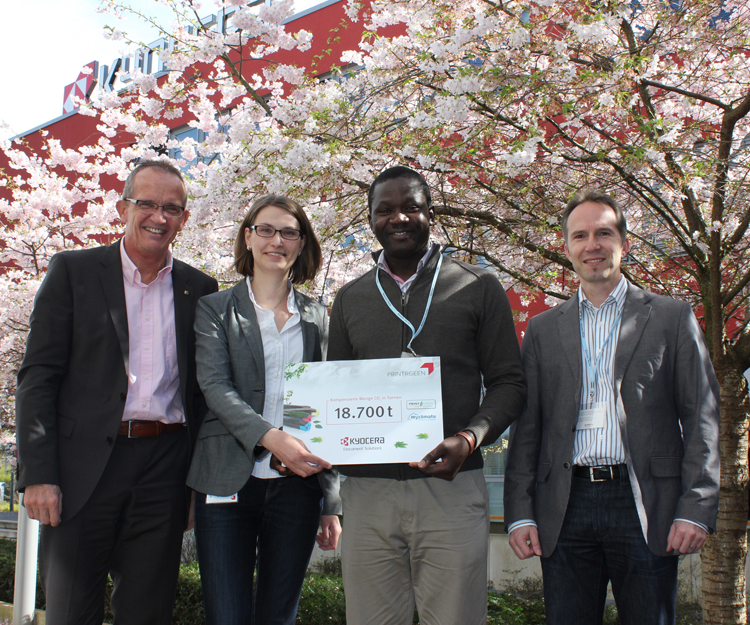 Jared gave the Kyocera team first hand impressions from the project they support and handed over a certificate over the CO₂ offsets resulting from the first month of the collaboration. This collaboration between Efficient stoves for the rural population in the Siaya district" in Kenya.

"Our investment in this area so far is large, and represents a clear signal in favour of climate protection", says Reinhold Schlierkamp, Managing Director of KYOCERA Document Solutions Germany. "It was a great experience meeting the man who developed and built the supported project from scratch."

"Thanks to the involvement of KYOCERA, significantly more efficient stoves can be distributed to households in Kenya which have up to now been cooking on a primitive fireplace", explains Stefan Baumeister, Managing Director of myclimate Germany gGmbH. The offset volume since May 2013 was 18,700 tonnes of CO₂. "Additional to the climate protection effects our project radically reduces the fume exposure in the households, which is beneficial to the health of the population, in particular women and children. Furthermore, the local production of the efficient stoves generates high-quality employment opportunities," says Jared Buoga who is actually graduating at the university of Twente in Enschede.