Swiss musician and producer Dodo actually wanted to travel to Africa with a shipping container last year, to record his album there, but then the COVID-19 pandemic intervened. Without further ado, he crossed the Swiss mountain passes and recorded his album “Pass”, which immediately went to number one in the Swiss charts. Win two tickets for his concert at the Zurich Volkshaus on 7 October! 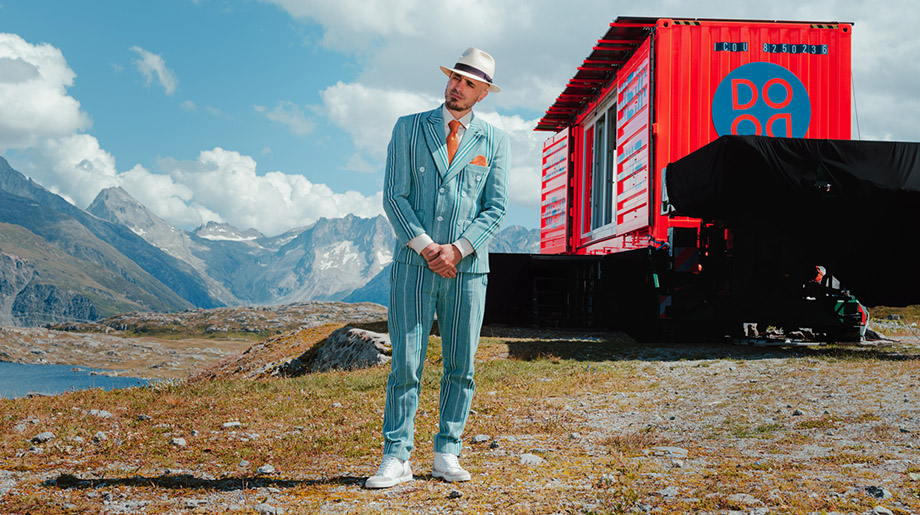 Dodo standing in front of the shipping container on the Grimsel Pass. Picture: (Jen Ries)

Dodo—full name Dominik Jud—grew up on the Ivory Coast. The fact that his roots were on the African continent led him to come up with the idea of travelling in a converted shipping container and going by water from Basel to the Ivory Coast, while at the same time recording his next album.

The “Ministry Of Good Vibes” shipping container, which is twelve metres long and weighs 11.5 tonnes, is equipped not only for eating, sleeping and living but also for making music professionally, thanks to the built-in sound studio.

But things turned out differently—as a result of the pandemic, he found himself crossing the Swiss mountain passes in 2020 (Swiss Television’s documentary about the project). Even though that made the journey a little shorter, Dodo wanted to take responsibility for the emissions caused by the large container and the rest of the journey. So, in addition to solar panels on the roof, he offset the unavoidable emissions in a carbon offset project with myclimate, because environmental awareness is important to Dodo. That way, he also expressed his clear support for the CO2 Act.

On his journey over the passes, Dodo recorded the album “Pass” which came out on 12 February 2021 and immediately climbed to number one in the charts. And despite this success—Africa has not been cancelled, only postponed. Win 1x2 tickets for his concert at the Zurich Volkshaus on 7 October! Reply with the subject line “Dodo”! We will select the winners at random and contact them individually.