From Waste to Organic Fertiliser in Nepal

The project processes organic waste into compost. In this way, greenhouse gas emissions from traditional landfills are reduced and high-value fertiliser is produced for surrounding fields.

Waste is a major problem in Kathmandu, and organic waste amounts to almost 70 per cent of the total waste. To solve this problem, Biocomp Nepal has been created. In March 2011 – with support from myclimate – a pilot project started with a composting facility in the surroundings of Kathmandu. The waste from vegetable markets is collected and used to produce compost through aerobic degradation, which  also reduces methane emissions from landfills and helps to combat the waste problems of the city. After successfully gaining experience in composting, Biocomp built a larger and partly mechanised composting plant in Saibu in 2013. Thanks to the conversion to row composting, larger quantities of waste can be processed and a high compost quality can be guaranteed. The compost produced meets international quality standards in terms of nutrient content.

myclimate made advance payments to finance the investment costs and thus contributed significantly to the realisation of the project. In the long term, the composting plant will be able to finance itself through the sale of the organic fertiliser.

Furthermore, the plant creates jobs for local residents. The plant specifically promotes gender equality by giving jobs primarily to women who are discriminated against by their families.

Since the project started, 38,000 tonnes of organic waste have been collected and prevented from being dumped in landfills or in rivers. This organic waste was used instead to produce 3 000 tonnes of compost, which has been sold to local farmers.

As waste is a major problem in other cities in Nepal and other developing countries too, the project can potentially be replicated in different places in Nepal or elsewhere. Initiatives have already been started.

In addition to the climate, two parties benefit from the project: the population in and around Kathmandu, who are freed from stinking mountains of waste, and the farmers, who can harvest better crops with the high-quality compost and cultivate their fields more sustainably. There is a need for available and cheap natural fertilisers, which means that myclimate and Biocomp Nepal are promoting sustainable agriculture.

Nepal project on the UNFCCC page

This project contributes to 8 SDGs:

The application of compost increases the yiels of the farmers.

The reduction of waste dumped at the landfill reduces the contamination of water and soil.

The project supports women who are victims of domestic violence and have been cast out by the community by giving them jobs. 29 women have received a permanent job.

In total, 43 permanet jobs have been created.

Over 33'000 tonnes of organic waste have been collected.

6,499 tonnes of CO2 have been reduced by the project activity.

The project strengthens the global partnership for sustainable development. 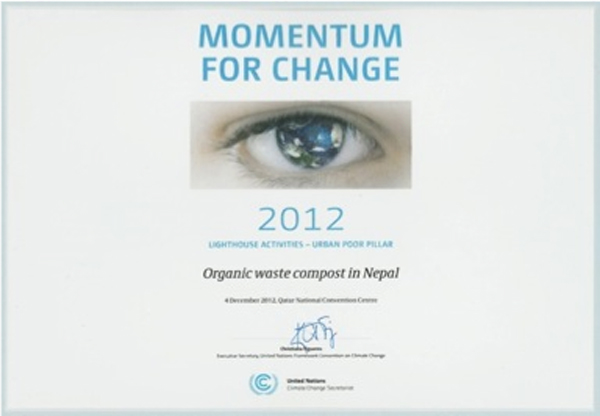